Grey Matter is the Omnitrix's DNA sample of a Galvan from the planet Galvan Prime.

Grey Matter is a grey-skinned, frog-like, bipedal alien that is only four inches tall with large green eyes, which have rectangular pupils. He wears a white jumpsuit with a black stripe going down it.

In the original series, Grey Matter wore the Omnitrix symbol on his back and his eyes were yellowish-green. He spoke with a high-pitched voice.

In the original series, Gwen as Grey Matter has Gwen's hair and more oval shaped eyes, with much smaller pupils. She wears a light blue jump suit with dark blue sleeves. She wears the Omnitrix symbol on her back. She also lacks the stripes Ben's form has.

In Ultimate Alien, Grey Matter wore the Ultimatrix symbol on his chest.

In Omniverse, 11 year old Grey Matter looks exactly the same as the original, but his collar is now black. His skin tone is also different.

16 year old Grey Matter now has a green jumpsuit with a black belt. His suit collar is now black, and the stripe on his head and jump suit are no longer present. He wears black, fingerless gloves with a green rectangle. His neck is slightly longer. His Omnitrix symbol continues to be present on his back, and his voice is slightly deeper.

10 year old Ben as Grey Matter in the original series 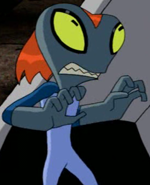 Grey Matter's small size belies his great calculative and technical intellect. He can create complicated machines from spare parts and understand the function of any device at a glance. Grey Matter's intellect serves as a problem solver and analytical help in difficult situations.

Grey Matter can sometimes manipulate living things by stimulating certain parts of their nervous system, if such beings can be controlled by external stimuli.

Grey Matter's size allows him to squeeze into small spaces and can climb walls due to tiny suction cups on his skin. He also has sharp teeth and his slimy skin makes him difficult to grab.

Grey Matter appears to be stronger than he looks, as he was strong enough to move a cleaner's bucket with mops in it in Ultimate Weapon, and in So Long, and Thanks for All the Smoothies, he was able to break a coolant pipe to freeze the Vreedle Brothers.

According to Derrick J. Wyatt, Grey Matter is amphibious and has gills.[1]

Grey Matter has a long prehensile tongue, owing to his insectivore nature.

Grey Matter's small size makes him unsuitable for physical battle, so he must outsmart his enemies in a fight. Animals like dogs and cats can be a problem, as they may see Grey Matter as a chew toy or food to them.

Retrieved from "https://fan-ben-10.fandom.com/wiki/Grey_Matter?oldid=4097"
Community content is available under CC-BY-SA unless otherwise noted.